Our Kickstarter project is over 50% of the goal now! To say "Thank you!" to our supporters we decided to implement another small feature in Krita: editing of the global selection. Now you can view, transform, paint and do whatever you like on any global selection!

To activate the feature, just go to main menu and activate Selection->Show Global Selection Mask check box. Now you will see your global selection as a usual mask in the list of layers in the docker. Activate it and do whatever you want with it. You can use any Krita tool to achieve your goal: from trivial Brush tool to complex Transformation or Warp tool. When you are done, just deactivate the check box to save precious space of the Layers docker.

This feature (as well as the Isolated Mode one) was a really low hanging fruit for us. It was possible to implement due to a huge refactoring we did in the selections area about two years ago, so adding it was only extending existing functionality. It is really a pity that the other features from the Kickstarter list cannot be implemented so easily :) Now I'm going to dig deep into the Vanishing Points and Transformations problem. Since Saturday I've been trying to struggle through the maths of it, but with limited success...

Next Windows and Krita Lime will have this feature included!

And don't forget to your friends about our Kickstarter!

During the first week of our Kickstarter campaign we collected more than 6500 eur, which is about 43% of the goal. That is quite a good result, so we decided to start implementing the features right now, even though the campaign is not finished yet :)

I started to work on three low-hanging fruits in parallel: perspective transformation of the image basing on vanishing points, editing of the global selection and enhanced isolate layer mode.

It turned out that the vanishing point problem is not so "low-hanging" as I thought in the beginning, so right now I'm in the middle of my way of searching the math solution for it: to provide this functionality to the user the developer must find right perspective transformation matrix basing only on points in the two coordinate systems. This problem is inverse to what everyone is accustomed to solve at school :) This is quite interesting ans challenging task and I'm sure we will solve it soon!

Until I found the solution for maths task, I decided to work on small enhancements of our Isolate Layer mode. We have this feature already for a long time, but it was too complicated to use because the only way to activate it was to select "Isolate Layer" item in the right-click menu. Now this problem is gone! You can just press Alt key and click of the layer or mask in the Layers docker. This enables many great use cases for artists, which now can be done with a single Alt-click: 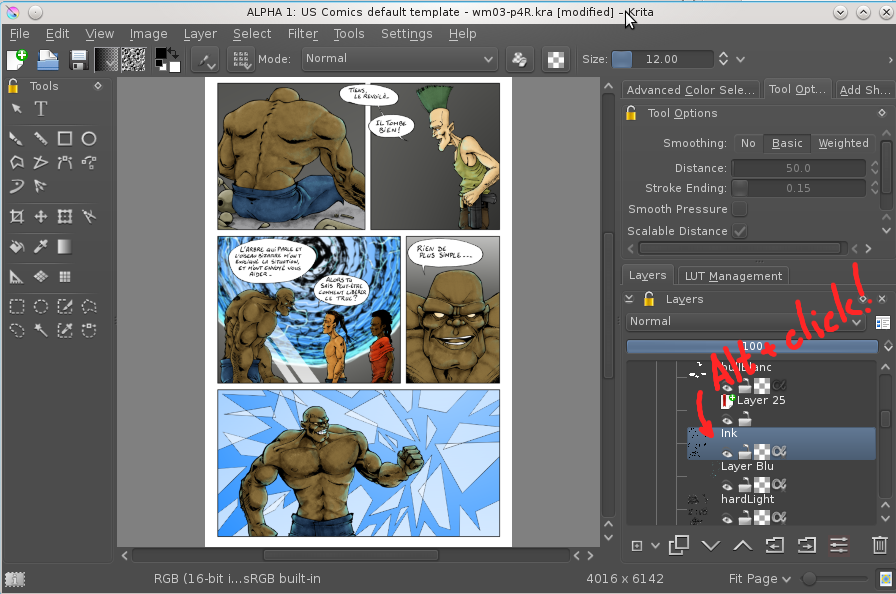 There are several more things we are planning to do with the Isolated Mode like adding a bit of optimizations, but that is not for today :)

The next packages in Krita Lime will include this new feature. They are now building at Launchpad and will be available tonight!

And don't forget to spread the word about our Kickstarter!

It was about a month when we last updated Krita Lime. And it is not because we had leisure time and did nothing here ;) In reverse, we got so many features merged into master so it became a bit unstable for a short period of time. And now we fixed all the new problems so you can see a nice build of Krita with lots of shiny features!

If you are a happy owner of a Wacom Artpen stylus, now you can use its rotation sensor efficiently: now it works on both Linux and Windows, and more, it works exactly the same way on both operating systems! For those who are not accustomed to work with drivers directly it might come as surprise, but the direction of rotation reported by the Windows and Linux drivers are opposite, not speaking about an offset by 180°. The good news: now it is gone! Just use it!


Avoid stains on the image when using touch-enabled Wacom device

The most popular advice you get from an experienced artist concerning Wacom touch-enabled usually sounds like: "disable touch right after connecting it". Well, it has some grounds... The problem is that the artist while painting with the stylus can easily tap on a tablet with a finger and soil the image with stains of paint. Yes, most of the taps will be filtered by the Wacom driver (it disables touch while stylus is in proximity), but sometimes it doesn't work. Anyway, now the problem is solved, though only on Linux.

to the beginning of your kritarc file, the touch will not disturb you with extra points on the canvas anymore! Though it will continue to work with UI elements as usual!

This is a very huge and really nice feature, on which we were working hard. There will be a separate article about it soon! Just subscribe to us and wait a bit! ;) 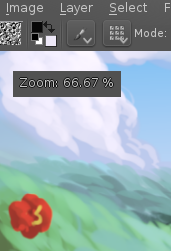 And yes, today we started our first donation campaign on Kickstarter! It will last for 30 days only, during which we are going to raise money for 2.9
release!

Help us, and together we will make Krita awesome!

Posted by Dmitry Kazakov at 6:01 PM No comments:

Some notes from Krita Sprint 2014

Almost two weeks have passed since we returned from the sprint, but we are now only beginning to sort out and formalize all the data and notes we did during the meeting. The point is, this time (as well as during the last sprint in 2011) we had three painters with us who gave us immeasurable amount of input about how they use Krita and what can be improved. This is the case when criticizing and complaining was exactly what we needed :)

So after having general discussions about Krita's roadmap on Saturday [0], we devoted Sunday on listening to painters. Wolthera, Steven and Timothée gave us short sessions during which they were painting their favorite characters and we could look at it and notice all the usecases and small inconveniences they face when working with Krita. The final list of our findings became rather long :), but it will surely have immense impact on our future. We saw not only wishes and bugs, we also had several revelations, the things which we could not even imagine before. Here is a brief list of them.

Yeah, not all the painters have a keyboard! ;) Sometimes a painter can use a tablet with built-in digitizer for painting. In such a case the workflow completely changes!

Though it might sound funny, but some of Krita features really surprised me! I never knew we could use old-good tools this way.
Well, there were many other issues we found during the sessions. There were also some bugs, but the severity of those was really minor. Especially in comparison to the sessions we did in 2011, when David Revoy had to restart Krita several times due to crashes and problems... We did really much progress since Krita 2.4!

Yeah, it was a really nice and efficient sprint! Thanks Boudewijn and Irina for hosting the whole team in their house and KDE e.V. for making all this possible!